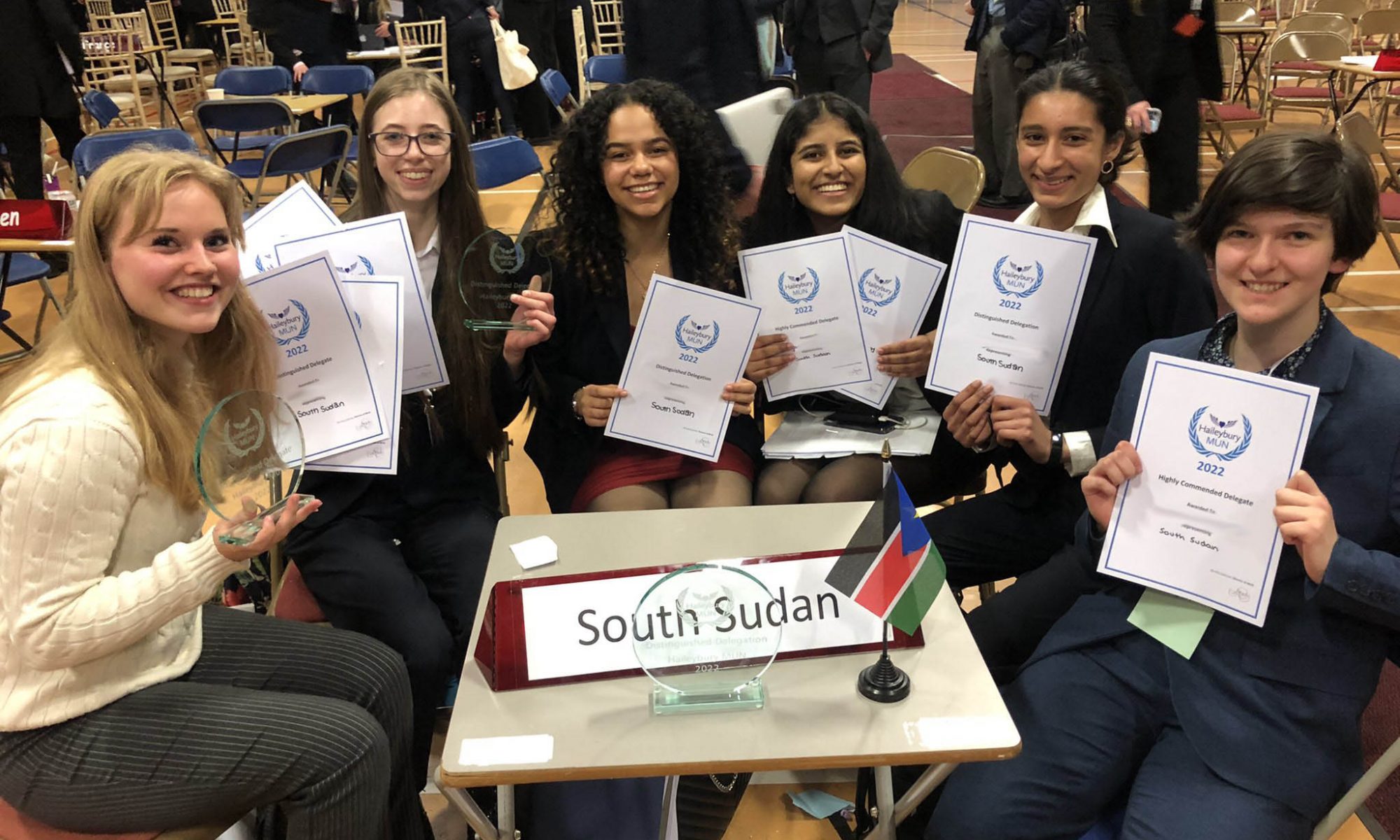 Wimbledon High School’s six Haileybury delegates reflect on their experiences of taking part in Model United Nations (MUN), and what they learned from the weekend-long conference in March 2022.

I have been doing MUN for a year now and have thoroughly enjoyed it. We get to debate and discuss multilateral issues from different perspectives. I have learnt so many valuable skills, such as how to formulate arguments on the spot and how to address controversial ideas diplomatically. The highlight of the year for me was the national Haileybury MUN conference. Not only was the debating really fun, it was also great to meet so many students from over a hundred different schools, including US schools. In my committee, Special Political (SPECPOL), we debated numerous issues such as the question of foreign aid to war torn countries, which is especially relevant given the ongoing Ukraine crisis. A favourite debate of mine was the question of offsetting the legacy of colonisation and slavery, a subject which I am already very passionate about. I enjoyed working as a team in the General Assembly, and the fact that our WHS delegation won one of only three ‘Distinguished Delegation’ awards was amazing!

It was my sister who initially piqued my interest in MUN by persuading me to attend my first session at the club when I was in Year 10. Once I had learnt the formalities of MUN debates, I became increasingly engrossed and ended up signing up for my first conference at Alleyn’s School. Fast forward a few years and I was lucky enough to be attending one of the biggest MUN conferences in the UK, held at Haileybury. I was representing South Sudan in the Human Rights Council, which for those of you familiar with their political situation, will recognise this to be quite a challenge! In MUN you are required to uphold the values and policies of the country you are representing which meant I was tasked with preventing members of the LGBTQ+ community from being allowed to serve in the military, denying sex workers protective rights, ensuring whistle-blowers were not granted protection by international law and encouraging other countries to absorb around 2.3 million displaced South Sudanese people (whilst conveniently leaving out that they were fleeing genocide). The weekend did not come without its challenges but it was an invaluable experience that not only gave me greater insight into the inner workings of the UN but also encouraged me to see things through an opposing lens – although I must clarify that I do not and will not hold any of the views I had to represent over the weekend.

Although the real UN can seem somewhat powerless with its inefficiencies and bureaucracy, the values it promotes – of peace, development, and human rights – are indispensable. Through the medium of MUN, we learn hands-on about these values and the actions needed to achieve them. Of course, MUN is great fun as well (I volunteered to give up my weekend for a conference). Memorable moments from the Haileybury conference included: everyone referring to themselves as “the delegate” – even when not in debate; disputes over the etymology of “cryptocurrency”; and my desperate attempts to argue that South Sudan, often deemed the most corrupt country in the world, is in fact, not at all corrupt. Additionally, my committee’s topics, including terrorism and outer space, were fascinating to debate. I was lucky enough to have my illicit arms resolution debated and passed in the General Assembly – a moment I will never forget!

I applied for this Model United Nations conference because I enjoy a challenge, although in the moment, when I feel under pressure, I do regret embarking on such an adventure. But afterwards, unscathed and evolved, I thank myself for it. This conference taught me that my trait of searching for intellectual stimulation is a gift. I now fervently recommend Jordan Peterson’s advice that “If you are not willing to be a fool, you cannot become a master”. Putting myself in the hot seat to be grilled by delegates who were more experienced than me developed my public-speaking skills and, most interestingly, taught me about myself. I was in the Special Committee which had the theme of ‘Health & Youth’. The four topics we discussed were: the right to healthcare for migrants, addressing mental health disorders in young people, equitable vaccine distribution and sexual education for all teenagers in school. These topics are all extremely complex and relevant to our lives today. Responding to points of order was exhilarating because I was encouraged to think quickly whilst remaining eloquent about the arguments I had. It is also something I value greatly because, when you listen to points of order, you are putting yourself in a new position by trying to understand other delegates’ perspectives to help you present your own.

Having only done one MUN conference before, I was surprised to be invited to Haileybury – a very prestigious event. Despite being worried initially, I was very glad I went; it was the most incredible experience. My committee was Environment and Ecology and we discussed many topics including multinational corporations, desertification, sustainable fishing and GMOs. After COP26, these subjects felt particularly important to discuss and we had lots of fruitful debate as a committee. I feel like I learnt so much over the weekend – about the inner workings of the UN, resolutions, and procedure. Fun fact: resolutions from the UN are not legally binding. Overall, I had a wonderful time and made lots of friends!

I developed an interest MUN when I was in Year 7, as the idea of discussing world issues and learning more about diplomacy appealed to me. At Haileybury MUN, my council touched on the issues of world hunger and discrimination against marginalised groups. Speaking from the perspective of South Sudan, reaching a compromise on these issues proved difficult as more developed countries failed to recognise the complexity of the problems faced by developing countries, or the religious barriers causing discrimination. Such experiences in Model UN always remind me of the great challenges faced by diplomats: MUN only really begins to skim the surface of the difficulties and complexities of compromise between countries. The experience imbued me with greater appreciation of the workings of the UN and has encouraged me to consider taking on the challenge of different careers within the field of international relations.