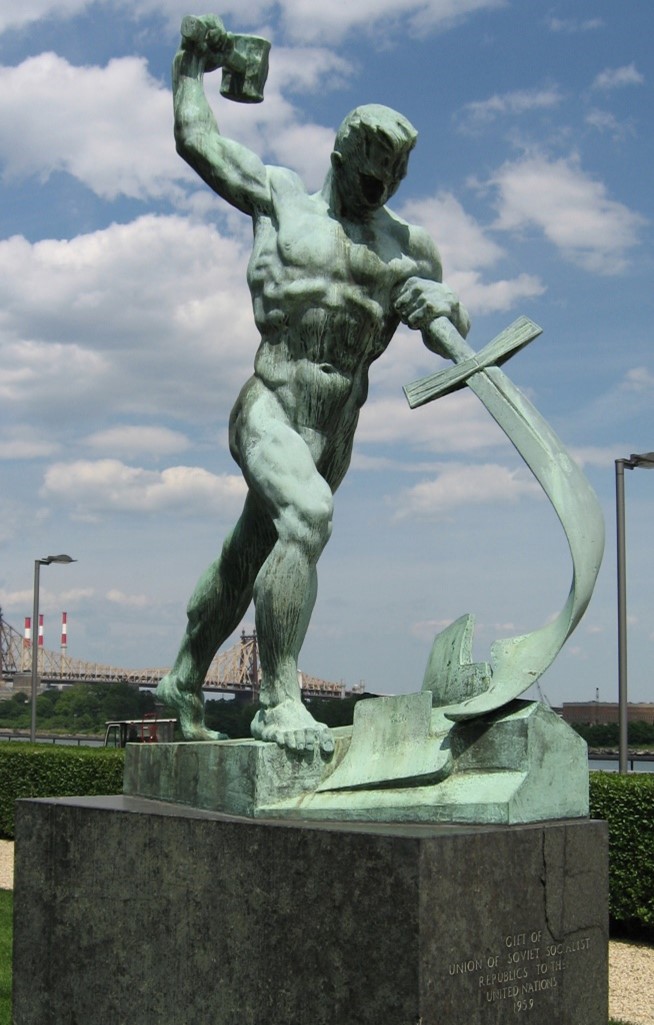 What is Model United Nations about?

At Haileybury Model United Nations conference in March 2022, delegates and advisors heard about this passage of the Bible from Isaiah Chapter 2, during a chapel service:

He will judge between the nations

and will settle disputes for many peoples.

They will beat their swords into ploughshares

and their spears into pruning hooks.

Nation will not take up sword against nation,

nor will they train for war anymore.

Established in the aftermath of the Second World War, the United Nations aims to ‘save succeeding generations from the scourge of war’ and ‘promote social progress and better standards of life in larger freedom’[1]. The image of taking instruments of death and destruction and transforming them into tools for productivity and growth inspired the statue pictured here[2], which stands in the UN garden in New York, and was a gift from the USSR in 1956.

The UN’s focus on finding solutions to conflict or global issues without recourse to military means makes the style of debating which Model United Nations (MUN) fosters quite different from parliamentary debating or other forms of school debating. Rather than being combative, MUN debates are collaborative, with delegates working together to draft and ideally pass resolutions which represent a commonly-agreed plan for future action.

What do pupils learn from Model United Nations?

The formality of the language used in MUN debates, and the typical forms of address (‘esteemed delegate’ or ‘the delegate of France’), avoiding the use of direct personal pronouns, takes personal elements out of debates. Delegates never represent themselves, but rather the views or policies of the country they are representing. The purpose is to engender debate that is civil, polite, and impersonal – although, admittedly, sometimes the heat of the moment can get too much for some delegates. They may well have to express views and ideologies which are entirely different from their own.

The removal of the personal does not preclude opportunities for individuals to shine: at Haileybury MUN, several WHS delegates were awarded for impressive contributions within their committees.  As with any form of debating, crafting one’s language and artfully applying knowledge to create impact are key, and our articulate, energetic pupils put their skills to the test, presenting powerfully on a range of issues. MUN is also distinctive in that those who speak most often, or most loudly, are not necessarily the most successful or admired delegates. Instead, it is powerful to witness younger or more reticent pupils quietly and calmly making their points in a fluent, cogent way. In our mini-MUN conference with Kings College School (KCS), we were delighted to see Year 9 pupils holding their own against Sixth Formers.

Some pupils can be intimidated by the formalised and highly-structured language required in MUN debate, but this is actually one of the benefits of taking part. Listening to a few debates in a relaxed context such as our weekly co-curricular club helps students acclimatise. This style is particularly effective for those who are nervous about public speaking. Formalised language provides participants with a script and a safe formula to speak from; it is striking how pupils who find social interactions more challenging open up when it comes to MUN debates.

The collaborative element of MUN goes far beyond the debating. We were particularly impressed by how our Haileybury delegates actively engaged with peers from other schools, persuading them to add signatures to their draft resolutions during lobbying sessions, or collaborating with them to submit co-authored resolutions. The most skilful chairs supportively encourage the less experienced delegates to contribute and coach them in the language of the debate, something our chairs at the KCS mini-conference exemplified.

Ms Parker participated in MUN conferences as a school and university student, which led her to a human rights internship at the UN in Geneva where she witnessed diplomacy first-hand. And while Ms Gilchrist was new to MUN on joining Wimbledon High, she has always been intrigued by the relationship between language and power. The increasingly divisive nature of public discourse, not only on social media but also in the political sphere – often characterised by one-upmanship more akin to the swords than the ploughshares of Isaiah – is well-documented. Given current political contexts, with war in Ukraine, the rise of the far right in Europe and beyond, and the combative, highly performative format of UK parliamentary debates, the collaborative style of MUN debating is more valuable than ever. Diplomatic skills should be prized as part of a twenty-first century education.