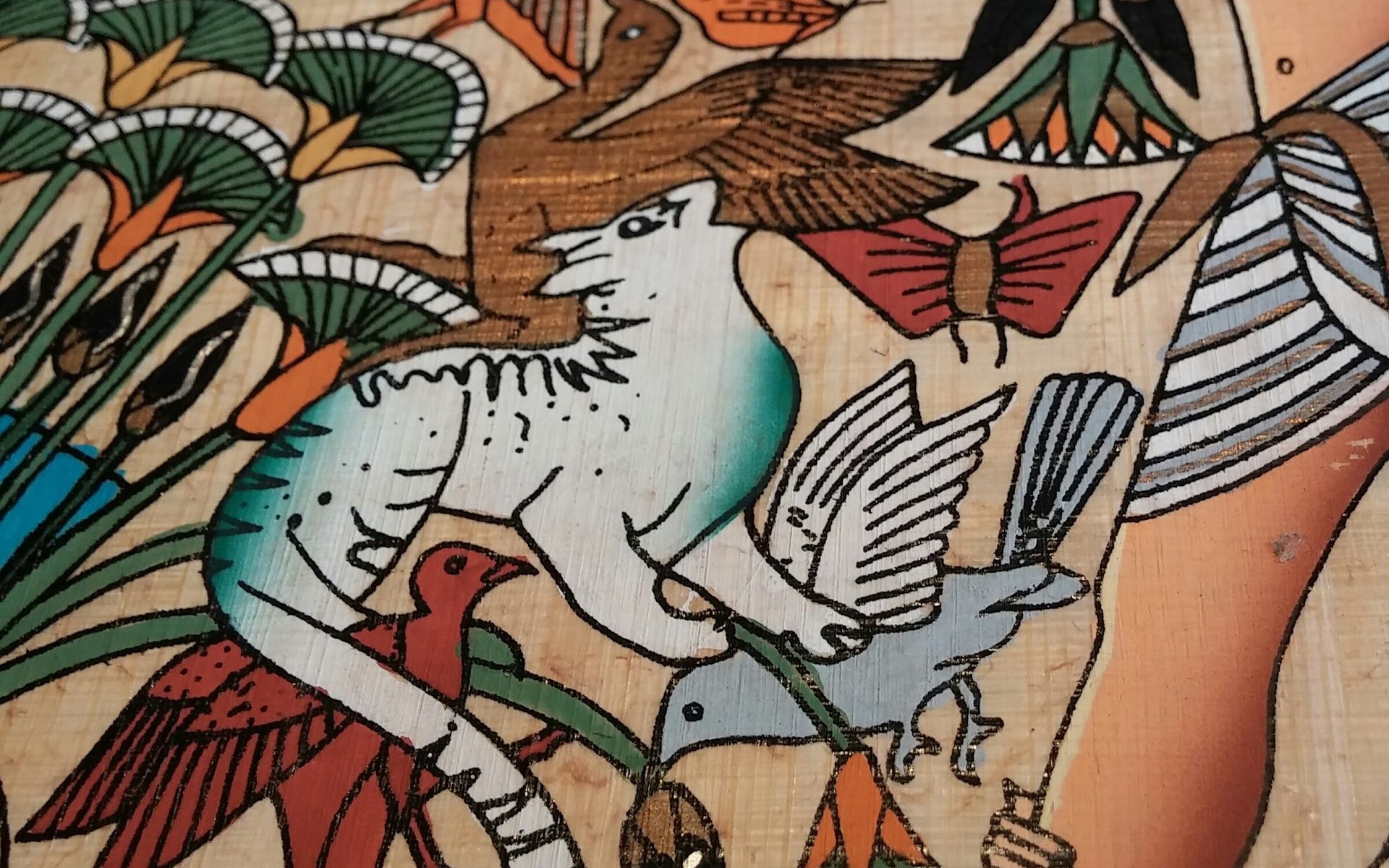 Elsa P traces the history of cats in Ancient Egypt – from humble ratcatcher to god, and from pet to votive offering – exploring both how they were represented, and how they lived within Egyptian society

Animals are an important presence in many aspects of society, culture and religion. They act as companions but also symbols, idols and gods. Their significance goes back centuries and their role in the development of cultures can be felt today. What I want to look at in this piece is the question, why is the cat so important?

The earliest historical depiction of the upright tail, pointing ears and triangular face of the domesticated cat appeared around 1950 BCE, in a painting on the back wall of a limestone tomb around 250 kilometres south of Cairo, Egypt. After this first feature, cats soon became a fixture of Egyptian paintings and sculptures and were even immortalized as mummies. Cats possessed the art of social climbing as they rose in status from rodent killer to pet to representations of gods. Does this mean the domesticated cat had a significant impact on the development of ancient Egypt?

Most ancient Egyptian artistic representations of cats were based on the African wildcat. With a light build, grey coat and black or light-coloured spots and stripes, the African wildcat is very similar to the tabby cat that we see in most domestic homes today.

With a prominent farming culture in ancient Egyptian society, cats were a useful tool to chase away dangerous animals such as venomous snakes and scorpions but progressively became symbols of divinity and protection in the ancient Egyptian world.

Paintings on Egyptian tombs show cats lying or sitting below chairs and chasing birds and playing. A recently discovered pet cemetery[1] (dating to the 1st and 2nd centuries CE) found on the outskirts of Berenice, on Egypt’s Red Sea coast holds the remains of cats with remarkable iron and beaded collars, which are believed to have died of old age. These discoveries suggest that cats were probably kept as companions and were loved and respected animals in Egyptian society.

“The ancient Egyptians, in general, did not worship animals. Rather, they saw animals as representations of divine aspects of their gods,” according to Julia Troche, an Egyptologist, assistant professor of history at Missouri State University[2]. In addition to domestic companionship, cats were seen as vessels that the Egyptian gods chose to inhabit, and whose likeness such gods chose to adopt. One god that was depicted as a cat was Bastet, the goddess of the home, domesticity, women’s secrets, cats, fertility, and childbirth. Bastet was first depicted as a fierce lioness, but later as a domestic cat and as dutiful mother with several kittens and a protector of the family. In tomb paintings, a representation of fertility was a cat sitting under a women’s chair, possibly arising from the fact that a female cat gives birth to a relatively large litter. Around 5th century BCE a large cult of Bastet devotees developed in the city of Bubastis near the modern-day city of Zagazig, north of Cairo. They would gather around a massive temple and would leave small cat statues as offerings for the Bastet. This popularity for Bastet persisted for almost another 1,500 years which further reinforces why the Ancient Egyptians respected and honoured the cat in their society. Ancient Egyptians thought of cats more generally, as protectors, while at the same time they respected their ferocity. The god Sekhmet, the goddess of war, is depicted as a lioness and was said to be a warrior and protector deity who kept the enemies of the sun god Ra at bay. “In some mortuary texts, cats are shown with a dagger, cutting through Apopis: the snake deity who threatens Ra at night in the Underworld,” Julia Troche explains[3].

As cats were fierce protectors in the eyes of the ancient Egyptians, it comes as no surprise that they played a vital role in the afterlife. Because of their highly respected status, the killing of cats in ancient Egypt was illegal. However, killing for mummification may have been an exception. A recent study[4] reported the carrying out of X-ray micro-CT scanning on ancient Egyptian mummified animals. The study explored the skeletal structure of a mummified cat and the materials used in the mummification process. The results showed that the cat was smaller than expected and that 50 percent of the mummy was made up of wrapping. Through dissection of the teeth of the cat, the scientists deduced that it was around 5 months old when it died and that the cause of the death was deliberate breaking of the neck. The study concluded that the cat was most likely purposely bred for mummification to provide votive offerings for the gods with cat associations. For example, the cat was used as a votive offering for the god Bastet. Mummified cats were bought by temples to sell to pilgrims who may have offered the mummified animals to the gods in a similar way that candles may be offered in churches today. Egyptologists have also suggested that the mummified cats were meant to act as messengers between people on earth and the gods. To uphold the demand for such offerings, entire industries were devoted to the breeding of millions of cats to be killed and mummified, and also so that they could be buried alongside people. This happened largely between about 700 BCE and 300 CE.

Cats were respected creatures in ancient Egyptian society. The representation of the ancient Egyptian gods as cats influenced the citizens’ behaviour towards these animals and played an integral part of religious practice. They also were a useful tool in the agriculture industry, keeping pests away from farmland. This admiration is still prominent in today’s western culture as many people keep cats as home companions and as pest control.

What Lies Under the Chair! A Study in Ancient Egyptian Private Tomb Scenes, Part I on JSTOR

Why Ancient Egyptians Loved Cats So Much – JSTOR Daily

Why were the ancient Egyptians obsessed with cats? | Live Science