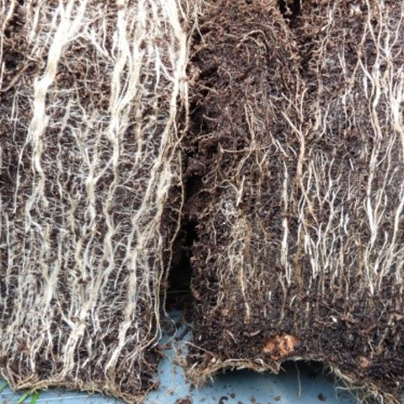 Freya, Year 13, explores how trees are able to communicate and help each other using a network of fungi in the soil.

Underneath your feet there could be possibly 300 miles of fungi stacked in the soil. This special network of fungi , called the mycorrhizal network , brings together fungi and trees in a symbiotic relationship which helps trees to communicate, coined the ‘wood wide web’. You may have unknowingly seen mycorrhizae before; it is long and white and looks a bit like silly string.

When a tree seed is germinating, its roots grow towards the fungi in the soil. In return for nutrients and water from the fungi, trees send sugars down to them. This is of important value to fungi as they cannot photosynthesise (and so make their own sugars, which are needed for growth). Not only does the network connect the fungi and trees, but also the different trees in a given area. All the trees whose roots grow into mycorrhizae are linked in a network. This allows the trees to communicate.

Using the mycorrhizal network, a tree that has been taken over by a certain pest can send danger signals to other trees. When other trees pick up this signal, they release their own chemicals above ground to attract the predators of the pest towards them, thereby reducing the population of pests.

Amazingly, when a tree ‘knows’ it’s dying it will do everything it can to aid the survival of the trees around it. Researchers noted that as an injured tree was dying, it sent all of its carbon down through its roots into the mycorrhizal network so that it could be absorbed by neighbouring trees. In doing so, these neighbouring trees were strengthened. 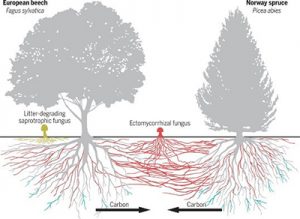 The driving researcher behind this work, Suzanne Simard, found that trees will help each other out when they’re in a bit of shade. She used carbon -14 trackers to monitor the movement of carbon from one tree to another. She found that the trees that grew in more light would send more carbon to the trees in shade, allowing them to photosynthesise more and so helping them provide food for themselves. At times when one tree had lost its leaves and so couldn’t photosynthesise as much, more carbon was sent to it from evergreen trees.

This discovery could be used in the future to reduce the disastrous effects of deforestation. If loggers keep the network of fungi intact, with many of the oldest trees still present, new trees planted will be able to utilise and reuse carbon more efficiently thanks to the wood wide web.