Anna (Year 13) explores the works of Euripides and endeavours to establish whether he was a feminist through analysis of his plays. 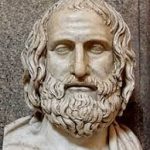 Often regarded as a cornerstone of ancient literary education, Euripides was a tragedian of classical Athens. Along with Aeschylus and Sophocles, he is one of the three ancient Greek tragedians for whom a significant number of plays have survived. Aristotle described him as “the most tragic of poets” – he focused on the inner lives and motives of his characters in a way that was previously unheard of. This was especially true in the sympathy he demonstrated to all victims of society, which included women. Euripides was undoubtedly the first playwright to place women at the centre of many of his works. However, there is much debate as to whether by doing this, Euripides can be considered to be a ‘prototype feminist’, or whether the portrayal of these women in the plays themselves undermines this completely.

Let us first consider Medea. The play focuses on the eponymous heroine, and centres around her calculated desire for revenge against her unfaithful husband, Jason, which she achieves by killing his new wife and her own two children, then fleeing to start a new life in Athens. 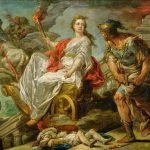 Medea is undoubtedly a strong and powerful figure who refuses to conform to societal expectations, and through her Euripides to an extent sympathetically explores the disadvantages of being a woman in a patriarchal society. Because of this, the text has often been read as proto-feminist by modern readers. In contrast with this, Medea’s barbarian identity, and in particular her filicide, would have greatly antagonised a 5th Century Greek audience, and her savage behaviour caused many to see her as a villain.

This negative reception of Euripides’ female characters was echoed in the Greek audience’s response to Euripides’ initial interpretation of the Hippolytus myth, in which Aphrodite causes Phaedra, Hippolytus’ stepmother, to fall in love with her stepson, which has horrific consequences. It is believed that Euripides first treated the myth in a play called ‘Hippolytus Veiled’ 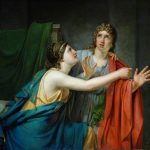 . Although this version is now lost, we know that he portrayed a shamelessly lustful Phaedra who directly propositioned Hippolytus on stage, which was strongly disliked by the Athenian audience. The surviving play, entitled simply ‘Hippolytus’, offers a much more even-handed and psychologically complex treatment of the characters: Phaedra admirably tries to quell her lust at all times. However, it could be argued that any pathos for her is lost when she unjustly condemns Hippolytus by leaving a suicide note stating that he raped her, which she does partly to preserve her own reputation, but also perhaps to take revenge for his earlier insults to her and her sex. It is debatable as to whether Euripides is trying to evoke sympathy for Phaedra and her unfortunate situation, or whether through her revenge she can ultimately be seen as a villain in the play.

However, if you look at Hecuba, Andromache, and the Trojan Women, we see how the evils of war have a grave effect on women, and in his play ‘Ion’, he sympathetically portrays Creusa, who was raped by Apollo and forced to cover up the scandal. Although some believe it is difficult to fully label Euripides as a feminist, he nonetheless understood the complexities of female emotion in a new and revolutionary way, whether the audiences, from both then and now, view his female characters as heroines or as villains.