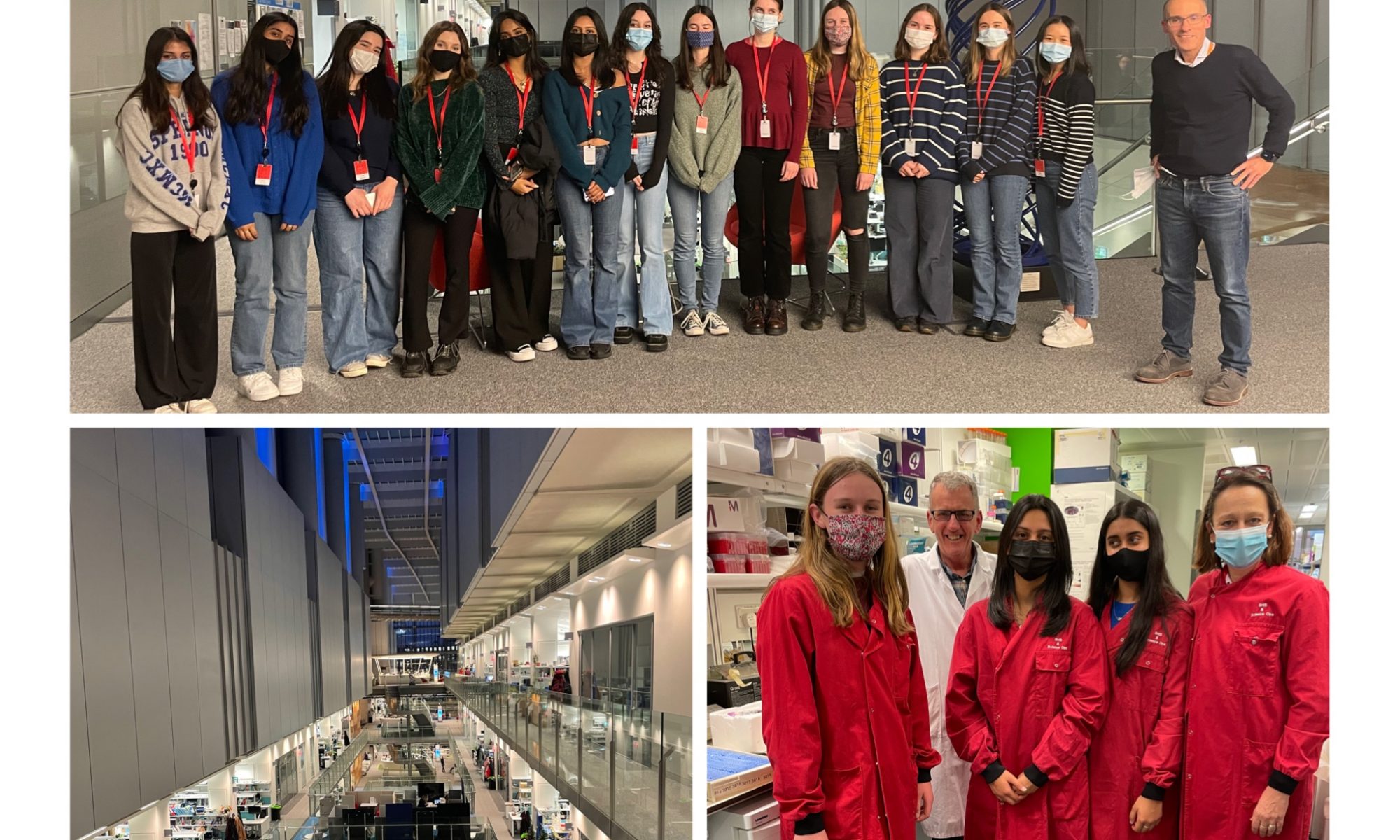 WARNING – This article will include mentions in a biomedical sense to some topics which some readers may find disturbing, including death, cancer and animal testing.

Last Friday some of the Biology A-level students were privileged enough to go on a trip to the Francis Crick Institute. All sorts of biomedical research goes on inside the Institute, but we went with a focus on looking at the studies into cancer. During our day, we visited the ‘Outwitting Cancer’ exhibition to find out more about the research projects and clinical trials that the Crick Institute is running; we had a backstage tour of the Swanton Laboratory to learn about the genetic codes of tumours and find out more about immunotherapy and I attended a discussion on the impact pollution can have on the lungs.

We started our trip by visiting the public exhibition ‘Outwitting Cancer’, with Dr Swanton as our tour guide. We first walked through a film showing how tumours divide and spread using representations from the natural and man-made world. This film also showed that tumours are made up of cancer cells and T-cells (cells involved in the immune response) trying to regulate the growth of the cancer cells. We then moved through to an area where several clips were playing outlining the different projects underway at the Crick Institute in regards to cancer. There were many different projects on display about different clinical trials and research projects looking into understanding and fighting cancer, but the one which fascinated me the most involved growing organoids (otherwise known as mini-organs) from stem cells. The stem cells would be extracted from the patient and used to grow these organoids, which would then be used to see how they respond to different drugs. This would allow each treatment to be highly specified to the patient, and so perhaps lead to higher survival rates among these patients. In this same section of the exhibition there was a rainbow semi-circle of ribbons with stories clipped to these ribbons written by visitors to the exhibit of their experiences with cancer, ranging from those who have a lived experience, to those who are simply curious to learn more. It was a fantastic exhibit and I recommend you give it a visit yourself, it’s free!

As interesting as this exhibit was, for us the highlight was a backstage tour of the Swanton Laboratory followed by talks from members of the team working there. We learnt that they have found that there is homogeneity within tumours, a fact that was not known just a few years ago. What this means is that different sections of tumours have completely different genetic codes. This could significantly change the way which tumours are analysed and treatments are prescribed. Previously, one tumour sample was thought to be representative of the whole tumour, it is now known that this is not the case and multiple samples from different sections of the tumour should be taken to get a comprehensive view of its structure and how best it could be treated. Linked to this, one member of the team, a final year PhD student, showed us graphics which they had been able to take and colour of the different cells present in a tumour. One of the main reasons cancer develops to the point where treatment is needed is because the body’s immune system has failed to neutralise the cancer cells, they were working to find out why this may be. In one of the graphics shown to us, a different type of immune cell had actually formed a wall around the T-cells, preventing them from reaching the cancer cells in order to eliminate them.  This would be important knowledge when considering immunotherapy treatments, which encourage the body’s own immune system to fight back against the cancer. In this case there would be little benefit to injecting or strengthening T-cells, as they would not be able to reach the cancer cells. Immunotherapy itself is still a relatively recent invention, and it is still considered only after treatments such as chemotherapy have not been effective. By this stage the cancer is more advanced and much harder to treat with immunotherapy, so it is hoped that in the future immunotherapy will be considered before more generalised treatments such as chemotherapy.

Work is also being done to understand late-stage cancer. We were allowed into one of the stations where practical work is done (wearing red lab coats to indicate that we were visitors) and shown a series of slides showing where biopsies (a biopsy is the removal of a tissue sample) might be taken from a tumour. It was explained to us that TRACERx (the name of the project being undertaken in the Swanton Laboratory) had set up a programme where people living with late-stage cancer can consent to their tumours being used for post-mortem research. Often these individuals had also signed up for earlier programmes, so information on their cancer at earlier stages was available and it was possible to see how the cancer had progressed. It was also explained to us several of the methods used to store samples, including the use of dry ice (solid carbon dioxide) and liquid nitrogen.

The final presentation I attended (we were on a carousel in small groups) discussed the influence of pollution on lung cancer. It had previously been found that as we age, the number of mutations we have grows, so clearly mutations are not the sole cause of cancer as not everyone develops cancer. It has now been theorised that carcinogens, such as particle matter found in air pollution, activate these pre-existing mutations. Currently non-smokers comprise 14% of all lung cancer cases in the UK, as the number of smokers drops as people become more aware of the dangers of smoking, the proportion of people with lung cancer who are non-smokers will increase, making research as to what may cause this lung cancer even more important. Lung cancer in non-smokers is currently the 8th largest cause of death to cancer in the UK. Two on-going experiments are studying the effect of exposure to pollution on mutations in the lungs. One is being run within the Institute, exposing mice to pollution, and another in Canada, where human volunteers are exposed to the level of pollution average in Beijing for two hours. Whilst it is unlikely that this exposure will lead to new mutations, it may cause changes in those already present. All of the research projects presented to us are ongoing, and it really was a privilege to see what sort of work is going on behind the scenes.

All of us were incredibly lucky to be able to go on this trip and meet some of the scientists working on such fascinating projects within the Francis Crick Institute. Most of us were biologically-minded anyway, but were we not, this trip certainly would have swayed us.