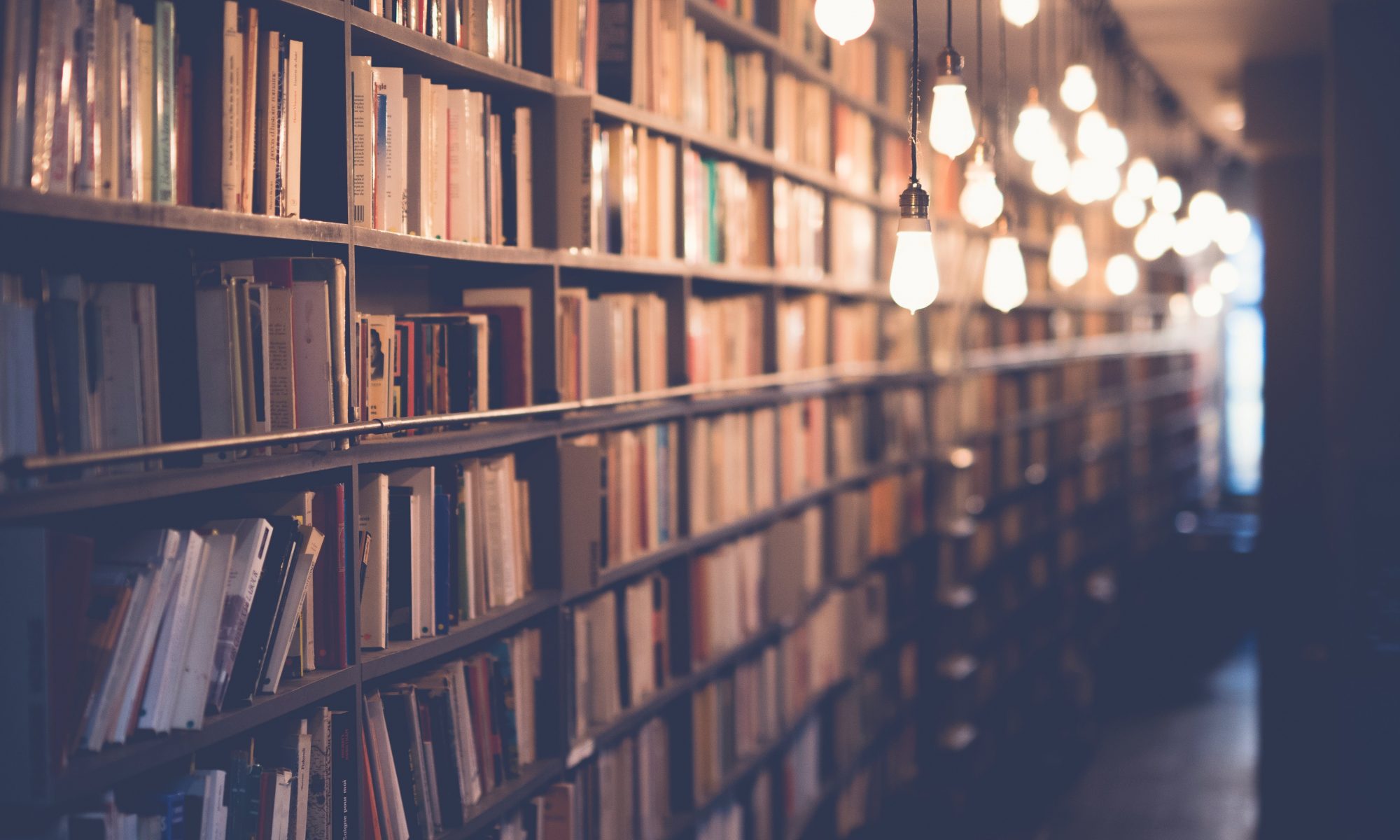 Miss Lucinda Gilchrist, Head of English, considers the virtues of being ‘stuck’, and how this can help pupils tackle challenging tasks with more confidence.

A growth mindset and being ‘stuck’

Carol Dweck’s influential work on growth mindset has become common parlance across schools now, and we know that helping pupils develop grit, perseverance and resilience is key to supporting them in their learning. A growth mindset is one in which ability is seen as ‘changeable’, and which ‘can be developed through learning’ (Dweck, 2006), rather than innate or fixed. As teachers, we want pupils to be able to reframe their thinking about things they struggle with to develop a growth mindset. We therefore provide scaffolds and supports to ease pupils into the ‘zone of proximal development’ and enable them to see smaller successes on the path to larger ones.

However, small and incremental scaffolds may actually serve to make them more reliant on the support from their teachers than on their own reasoning. An example of this: as part of some of my MA action research, I declared ‘war’ on the PEE/PEA structure, which I knew pupils had become too reliant on and which was making their writing too mechanical, and many of them simply relied on another acronym they had learnt in the past. By easing pupils into a task too gently, we run this risk: ‘if a task does not puzzle us at all, then it is not a problem; it is just an exercise’[1].

We therefore sometimes need to remove even more of the support structures, and defamiliarise pupils even further in order to make them less reliant on the scaffolds we put in place, and make them more aware of the ways in which they can get themselves unstuck, helping them to understand what to do when they don’t know what to do. We can expose them to challenges which they might consider beyond their ‘zone of proximal development’ – be this a new style of Mathematics problem, an unusual context for a theory in the Sciences, or a piece of music unlike anything they’ve heard before.

Many students of English Literature at KS4 are anxious about the concept of ‘unseen’ – the part of the examination where pupils have to write an essay about a text they have never seen before. It’s particularly challenging with poetry: a poem is often by nature oblique and abstract, resisting an easy answer. While this is what we love about poetry, it can be frustrating for some pupils who want the ‘right’ answer! Pupils who find developing their own interpretations of texts hard sometimes rely on ‘getting’ the notes about texts, and thereby the ‘right’ answer, rather than developing the habits they need to be able to respond to any text, whether one they have encountered before or not. This is understandable: while English teachers will argue that all texts are ‘unseen’ before they are studied, pupils can become used to the scaffold of discussing with pairs or small groups, and the reassurance that, at the end, the teacher would eventually confirm the ‘right’ response by guiding the discussion and asking purposeful questions.

As Angela Duckworth says in Grit, ‘We prefer our excellence fully formed’ (2016). We would prefer to show the world the successful final outcome, rather than the training and experimenting, which means that committing pen to paper and articulating an interpretation of an unseen poem, or even just verbally expressing an idea in class discussion, could make unseen poetry a locus of fear and failure where pupils may feel intimidated by the myth that some people just ‘get it’ and others don’t, rather than seeing it as an enjoyable challenge. When I surveyed my Year 10 class about what they felt the biggest challenges in responding to unseen poetry were, several of their responses focused on the idea of a fixed, or correct interpretation – they were concerned about “analysing the text correctly” or finding “the right message/s of the poem”.  While many of them commented that they liked “reading new poems” and to have a “fresh start and use things we’ve learnt from other poems”, it is interesting that the pressure to ‘get it right’ still prevails.

So I decided to give my pupils a challenge which would deliberately make them feel stuck. As a starter activity just as we started our unseen poetry unit, I gave them a poem which was on a Cambridge University end of year examination in 2014, and which consists only of punctuation[2]: 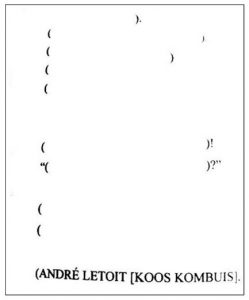 They were definitely daunted by this – in a survey after the lesson I asked them how they felt when they saw it: 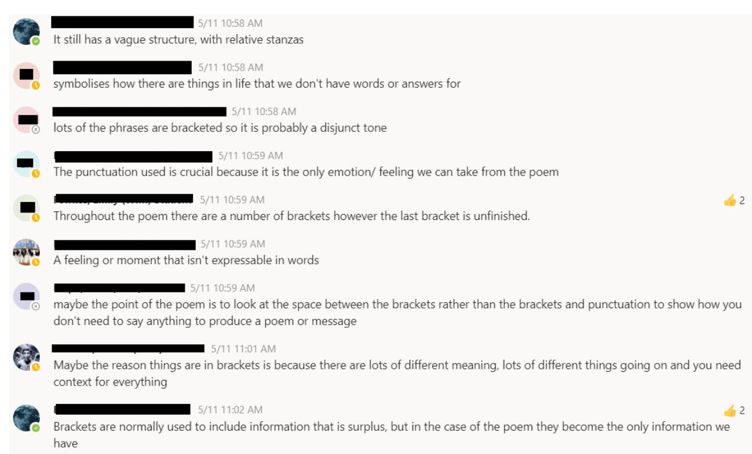 They were beginning to notice some really interesting ideas: the open-ended nature of the poem because of the unfinished last section, the implications of the punctuation marks which were there, and the fact that the lines were bracketed, suggesting some sort of devaluing of whatever words might have been inside them. I then revealed the title of the poem: ‘Tipp-Ex Sonata’, and explained that the poet, Koos Kombuis, was a South African performer and writer. With additional context, and using another pupil’s observation about apartheid, they then made some even more impressive deductions:

They had got very close to what Koos Kombuis had said about the poem himself: that it’s a protest against censorship of anti-apartheid voices in South Africa. So far, so good: the pupils had proved that they could reframe their thinking and use different clues to help them analyse the poem.

I then showed the pupils a poem in German: 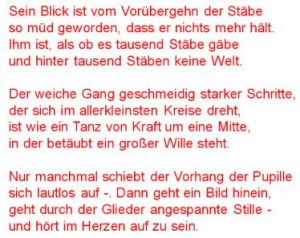 This, naturally presented pupils with a different problem. However, they could identify rhyme and internal rhymes, alliteration and sound iconicity, and when they heard the poem aloud they could hear the regular, almost monotonous iambic pentameter. They identified that the first and last words of the poem were the same (although one is a pronoun and the other is a verb, they were using the right sort of reasoning!), and made an interesting point about the poem having a cyclical structure as a result. We spoke about how these gave the impression of something enclosed or making repeated movements – and of course, they were actually very close! This poem, ‘Der Panther’ by Rainer Maria Rilke[3], is about a panther, trapped in a cage and moving around in tiny circles as his mind calcifies. Without realising it, and without knowing any of the words, the pupils managed to understand this poem at a surprisingly deep level.

I then asked the pupils their feelings about unseen poetry, having attempted these two poems which would have been certainly at best uncomfortable, and at worst enough to make them feel ‘stuck’:

Duckworth, A. (2016) Grit: Why passion and resilience are the secrets to success, Vermillion.