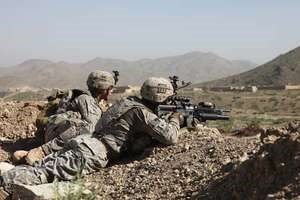 Jessica, Year 13, explores military medical advancements in recent conflicts, discussing their impact and whether the nature of war acts as an inspiration for innovation.

In 2001, the conflict in Afghanistan began, continuing until a majority of British troops withdrew in the final months of 2014. During these years, 6,386 British personnel were injured, with 28 fatalities, leaving the survival rate at 99.6%.

This was unheard of in previous wars and a major success story for military medicine. However, the injuries and trauma to the soldiers during this period of time increasingly involved haemorrhaging and amputations due to gunshot wounds and IEDs (also known as improvised explosive devices – a type of unconventional crude homemade bomb). These IEDs cause extensive blood loss which has been attributed to 50% of combat deaths since World War Two. In order for these soldiers to survive, a change had to be made in the form of military medicine to preserve life and limb. There are three major advancements in military trauma medicine which all arose from the need to problem-solve solutions to the new injuries personnel and the medics were now witnessing.

The first is haemostatic dressings. During the period of the Afghanistan conflict, two new dressings were developed: XSTAT and QuickClot powder which contain components such as fibrinogen and thrombin catalysing the natural coagulation response. XSTAT uses 92 medical sponges in a pocket-sized injector to pack an open wound and halt bleeding within fifteen seconds. XSTAT increases the chance of survival and holds pressure until the patient can reach a medical centre. They also contain a molecule which is visible on an X-ray to ensure all sponges are removed later to prevent infection.

Secondly, there was a development in the traditional tourniquet. A tourniquet is a constricting or compressing device used to control venous and arterial blood flow to a portion of an extremity for a period of time. This is possible because it creates pressure equal to or higher than the patient’s systolic blood pressure. The single hand tie tourniquet is a development from the original tourniquet used by army medics which had to be applied by the medic and thus were only carried by them. Without the patient being able to apply their own tourniquet, crucial time and blood was lost whilst the medic reached the injured individual, reducing their chance of survival as well as increasing the complexity of their treatment and injuries. This is when the Clinical Application Tourniquet (CAT) was developed and introduced into the US Army in 2005. It was the first single-hand tie tourniquet, allowing the soldiers to treat their own injuries immediately until the medic could attend and provide more advanced care. The tourniquet distributes pressure over a greater area which is advantageous because it reduces the underlying tissue and nerve damage, preventing it from becoming ischemic, a deficient supply of blood, whilst remaining effective. This decrease in time before a tourniquet is used has decreased the mortality rate due to haemorrhaging by 85%.

A third category of advancements is in the use of blood and the way it is transported. Blood and blood products, such as platelets, are crucial in the treatment of haemorrhaging and amputations. However, in order for it to be viable for transfusion, it must be maintained in a cool, constant environment, far from the natural one in Afghanistan. This was previously a significant disadvantage and contributed to the low survival rates for haemorrhaging but improved with the development of the blood container. The Golden-Hour mobile blood container stores up to four units of blood and platelets at[1]the required temperature of six and two degrees Celsius respectively, for 72 hours without electricity, batteries or ice to aid emergency medics. Crucially, this enabled blood to be brought forward to the battlefield rather than stored at the field hospital.

The environment of the military and the nature of its role means that trauma medicine needs to evolve to deal with the style of injuries it is experiencing: invention through desperation. However, it is important that the care not only reflects the immediate treatment of the patient but also considers their long-term care to ensure they can achieve a high quality of life post-conflict.