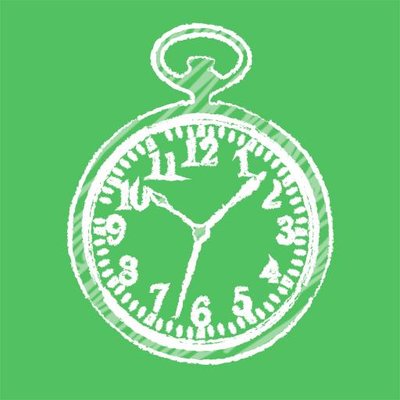 Daisy (Y12) explores the significance of the castles that are dotted all over the British Isles, arguing that we should look beyond their architectural genius to study the stories behind them.

Castles are undoubtedly the most important architectural legacy of the Middle Ages. In terms of scale and sheer number, they undermine every other form of ancient monument and dominate the British landscape. What’s more, the public has an enduring love affair with these great buildings since they play an intrinsic role in our heritage and culture, meaning that over 50 million people pay a visit to a British castle each year. 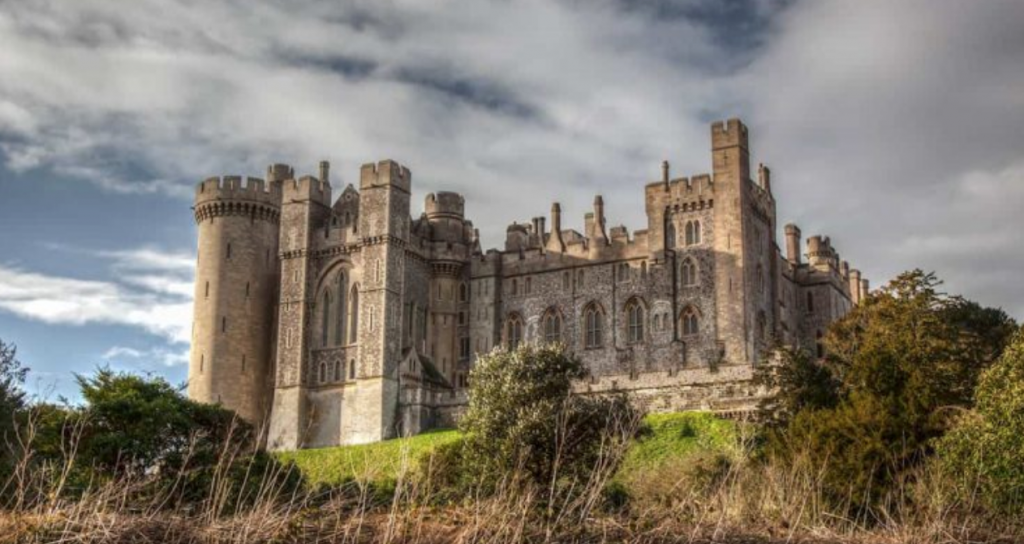 The period between the Normans landing at Pevensey in 1066 and that famous day in 1485 when Richard III lost his horse and his head at Bosworth (consequently ushering the Tudors and the Early Modern period in to England), marks a rare flowering of British construction. Whilst the idea of “fitness for purpose” was an important aspect of medieval architecture, the great castles of the era demonstrate that buildings had both practical and symbolic use.

One of the most iconic forms of medieval castle, was that of the Motte and Bailey which ultimately came hand in hand with the Norman conquest of 1066. The Bayeux Tapestry eloquently depicts the Norman adventurers landing in Pevensey and hurrying to occupy nearby Hastings. The men paused on the Sussex coast and are said to have indulged in an elaborate meal whereby they discussed their plans for occupying the highly contested country. The caption of the Tapestry notes “This man orders a castle to be dug at Hastings”, which is followed by a rich scene illustrating of a group of men clutching picks and shovels heading to start their mission- castles were the Normans first port of call. In the years that followed, castle-building was an intense and penetrating campaign, with one Anglo-Saxon Chronicler stating that the Normans “built castles far and wide throughout the land, oppressing the unhappy people, and things went from ever bad to worse”. It was vital for William to establish royal authority over his newly conquered lands, and thus the country saw the mass erection of potentially more than 1,000 Motte and Bailey castles. With these buildings, speed was of the essence, and so the base, or Bailey, was made of wood, while the Keep (which sat on the top of the Motte) was relatively small and made of stone. 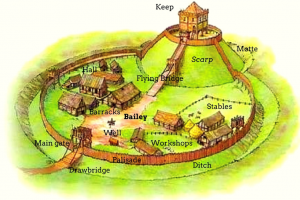 A drawing displaying a Motte and Bailey Castle.

Despite the fact that these castles obviously served a defensive purpose, with the elevation from the Motte providing the Norman noble with a panoramic view of the surrounding countryside, their symbolic purpose was arguably of greater significance. The erection of such a large number of castles set out to alter the geopolitical landscape of the country for ever and made sure that the Norman presence would be felt and respected. Figuratively, the raised Keep acted as a physical manifestation of the Norman’s dominance over the Anglo-Saxons with the upwards gradient effortlessly representing the authoritative function and higher superiority of the Lord, which was the fundamental aspect of the feudal system. Additionally, as many academics tend to emphasise, the fact that they were often located in order to command road and river routes for defensive purposes meant that their possessors were also well placed to control trade, and thus could both exploit and protect mercantile traffic.

Another key development in castle building occurred approximately 200 years after the Battle of Hastings, during the reign of Henry II. Prior to Henry’s accession, England had been burdened by civil war and a period known as the “anarchy” under his predecessor, King Stephen. Taking advantage of the confusion and lawlessness displayed throughout Stephen’s reign, the barons had become fiercely independent. They had not only issued their own coinage but also built a significant number of adulterine castles and had unlawfully adopted a large sum of the royal demesne. As a result, in order to establish royal authority, Henry set about demolishing these illegal castles en-masse, on which he expended some £21,500, and further highlighted his supremacy. Thus, as seen under the Normans, castles were again used as a means of establishing royal authority. From here the British landscape was significantly altered for a second time, which, in a period lacking efficient communication and technologies would have been a highly visible emblematic change impacting all members of society from the richest of the gentry to the everyday medieval peasant.

As a result, whilst is it important to appreciate the architectural styles and physical construction of medieval castles, I believe it is vital to acknowledge their symbolic nature, and appreciate how through the introduction of such fortresses, peoples’ lives would change forever.