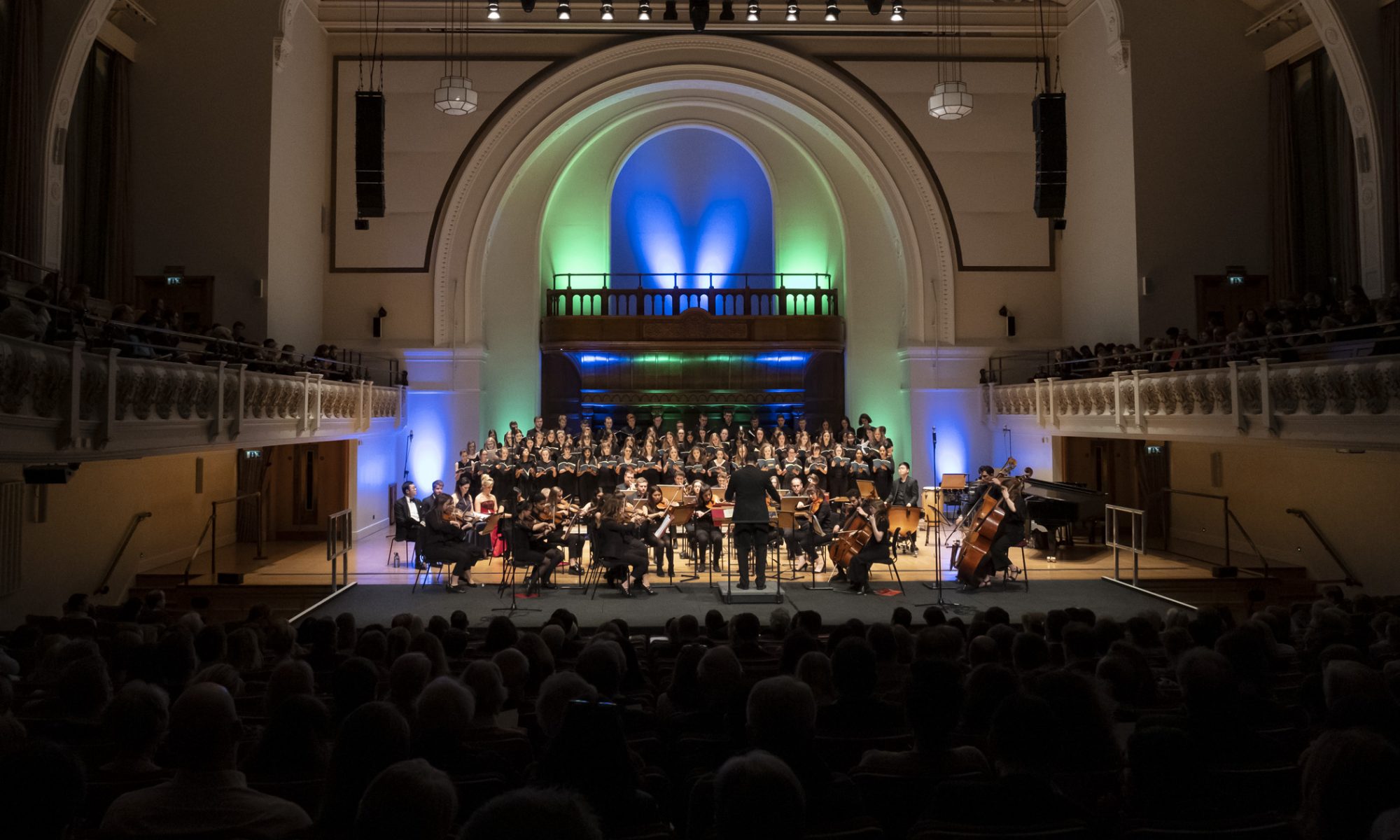 It was a privilege to perform in Cadogan Hall which is a very famous, beautiful music hall in Sloane Square dating back to 1907 that has hosted some of the greatest performances of all time. Its number of staircases, dressing rooms, corridors (and lack of signposts!) shows that the entire building was built to impress and a lot of the backstage is just as ornate as the front room itself. It’s wonderful acoustic and scenery lent itself very well to repertoire we did. I, for one, really enjoyed learning pieces by the likes of Brahms, Prokofiev, Mozart, Whitacre and Marquez in Symphony Orchestra, Canto and Sinfonia. In Symphony Orchestra, most of the songs stemmed back to a dance style with pieces such as Brahms’ first Hungarian Dance, a Conga by Marquez and Danza Ritual Fuego by De Falla. These pieces were all really fun to play with a strong sense of movement and liveliness. In the second half, Canto and A Cappella got the chance to perform with tenors and basses- a rare opportunity in an all-girls school. The Mozart Requiem took up most of the second half of the concert – being in Sinfonia, we got to accompany the choir – a new experience for me. We particularly enjoyed performing all these great pieces in such a prestigious venue.

Rehearsals for the concert started as far back as the mid-stages of the Autumn term as there was lots of challenging material to learn, both individually and then putting it together as ensembles. Preparations, however, had been going on even many months before that by the amazing music teachers to select and arrange repertoire that we would enjoy playing and which would show off our abilities. Over all this time each of the ensembles rehearsed for a minimum of an hour each week, not taking into account private practice. This is an especially impressive amount considering that most girls are involved in more than one group, displaying the incredible commitment, enthusiasm and engagement of everyone who performed at Cadogan Hall. Furthermore, as the concert drew nearer, the girls in A Cappella and Sinfonia were involved in a 4-hour long Saturday morning rehearsal during which they first sang with the professional tenor and basses, a really challenging task which was achieved with true Wimbledonian spirit and significant amounts of coffee. Finally, on the day we arrived from 12:30 at Cadogan Hall for our final run-through of the concert, getting used to the slightly different sound due to the addition of professional musicians playing parts we weren’t used to hearing. Then the concert began…

It is incredible to see how WHS’s music-making has progressed over the years we have been playing at Cadogan Hall. This year we saw the addition of four trombone players to the orchestra, as a result of a new scheme teaching trombone in school, and with the twelve-strong brass section, the orchestra was able to perform repertoire such as Prokofiev’s intense ‘Dance of the Knights’ from Romeo and Juliet. The concert included music written over a span of two hundred years from Mozart to Whitacre, showing the breadth of repertoire in the ensembles. In the first half of the concert, the Baroque Ensemble played a rousing rendition of Holst’s St. Paul’s Suite, a challenging four-movement work that celebrated string playing at school. The intermezzo and 3rd movement of the suite that included violin and viola solos, played sensitively by A Level students Miriam and Louisa, were a highlight of the performance, providing some calm contrast before the energetic 4th Movement. At the end of the concert, the year 13s were thanked onstage, as it was their last Cadogan Hall concert; their enthusiasm and participation in musical events will be greatly missed next year. We have all loved preparing for the concert and are so grateful to have had the opportunity to play in such a fantastic venue.