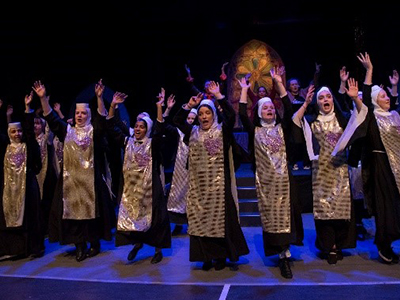 Anna, Year 13, discusses not only how rehearsal is the key to a good performance but also how the repetitive nature of rehearsing can aid studying.

For those who favour the more ‘academic’ subjects, drama may seem like a discipline which requires substantially less work than the sciences due to the propagated belief that a student does not need to revise as much, as well as the active nature which makes it more of a practical subject than academic. However, while there is certainly more action involved than with other subjects (with ‘acting’ being the most vital part of theatre for an audience), the claim that revision is not necessary is entirely false.

When speaking of acting, an audience member often reviews what they can see in front of them in one moment as, more often than not, they are not privy to the behind-the-scenes rehearsal process. While it is true that the audience impact is a vital part of theatre performance and theory, it is the rehearsal process itself which allows the final finished product to flourish; without it, the actor would not know how to act the line in order to achieve the greatest impact for the audience. Having studied drama myself for the entirety of my Wimbledon High attendance, as well as gotten involved in various plays and musicals over the years, I have come to think of this rehearsal process as high-intensity interval training (without the exercise, thankfully) which results in muscle memory and allows an actor to create the intended effect.

Rehearsing is primarily an active, practical activity; the repeated action over time enhances memory, which then lets an actor read off book (without a script) without any doubt of what they are going to do next or what their line is. For my fellow kinaesthetic learners – who Professors Dunn and Dunn describe as ‘students who require whole-body movement to process new and difficult information’ – this is already a behaviour that we are familiar with; when I am trying to memorise tricky English quotes or mathematic formulae, it is not uncommon to see me pacing back and forth or jumping up and down in order to enhance my learning. Viewing rehearsal as a study form automatically demonstrates academic benefits, as this subconscious form of learning that is routine for a drama student or actor can be employed elsewhere as a studying technique where ‘spaced repetition’ (that is, learning the same thing over a long time with regular intervals) where repetition over a month will result in 90% memorisation. This allows for more consolidation of information, and so ultimately the person will remember more than if they simply crammed the night before. Not only this, but it allows for muscle memory (a form of memory where there isn’t conscious awareness of the actions) to be developed; with resultant feedback received in rehearsal from the director, it means that a person not only develops skills and learning but allows more information to be absorbed as a result.

Therefore, when considering the long-term repetitive nature of rehearsal, it seems logical that it can be labelled a form of active revision; the act of rehearsal instills both useful studying tools in a person without them even realising, as well as a fun way to showcase messages to audiences with the eventual performance.