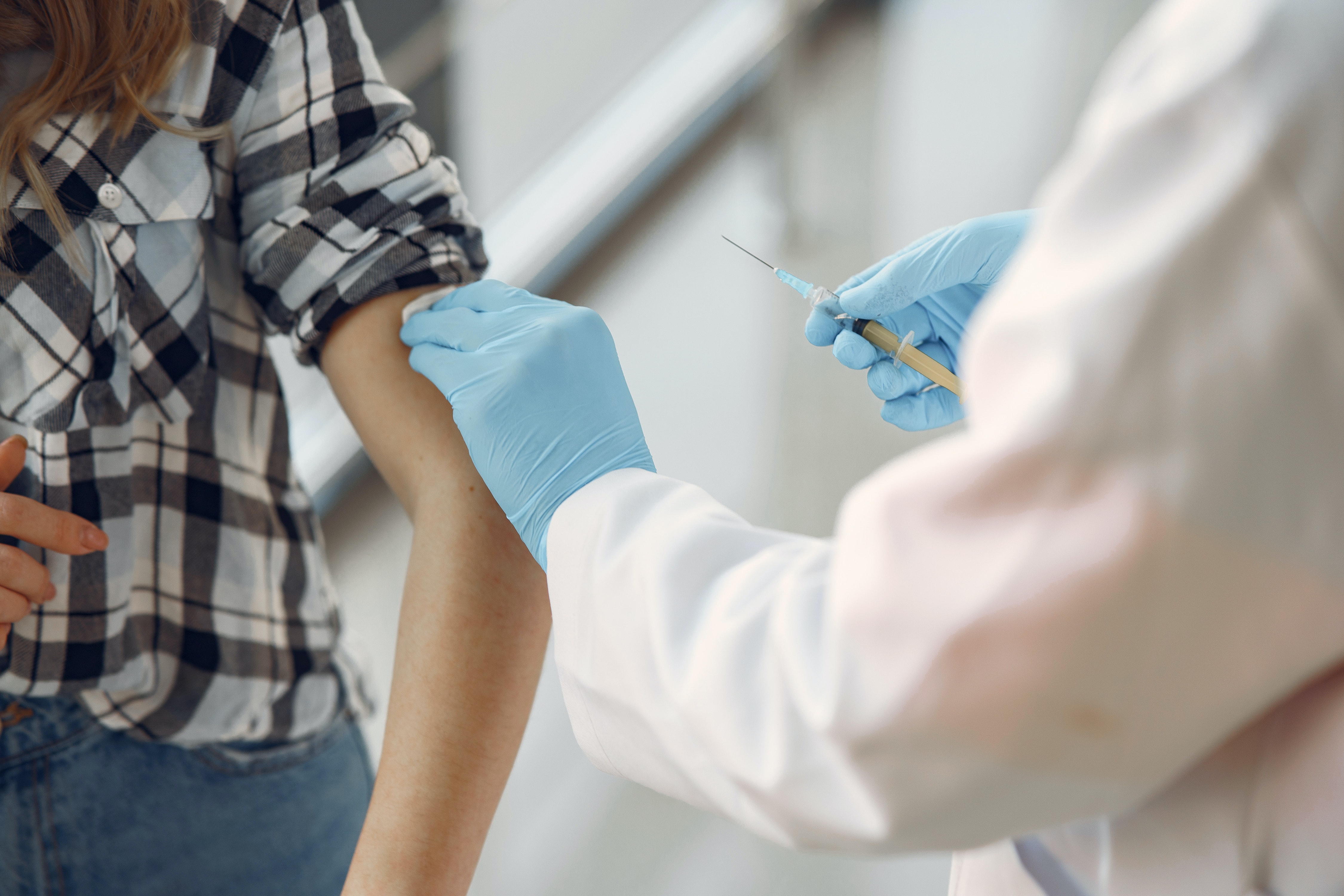 Sienna (Year 11) looks at the history of immunisation, from variolation to vaccination, exploring some of the topics around this important science.

While vaccination is considered quite a modern medical procedure, it has its roots in more ancient history. In China there are records of a procedure to combat smallpox as early as the year 1000. This was called variolation and was a procedure where pus was taken from a patient with a mild case of smallpox which was then given to another person. This means the person gets a less dangerous version of smallpox than they may have otherwise, promoting an immuno-response to act as a way of preventing the disease. This method became established around the world and was later seen in the work of Edward Jenner, who is considered the ‘father of vaccinations’, after he used this technique in Africa, England and Turkey in the 1700s.

Later in the 1700s, the USA learned of it from slaves who came inoculated from Africa. Even though a remarkable feat for the time, it wasn’t without risk, as the way the immunity was reached was by direct exposure to the virus, so infected patients could still die from the virus – as is what happened with King George III’s son and countless number of slaves. However, the risk of dying from variolation was far smaller than the risk of catching and dying from smallpox, so variolation was popular despite the risks.

Vaccination, as we know it in modern terms, was first established in 1796 by Edward Jenner. He was a scientist and fellow of the Royal Society in London. Seeing how much of a problem smallpox was at that time (and for most of history prior to then), Jenner was interested at innovating the process of variolation to tackle smallpox.

He was inspired by something he heard when he was a child from a dairymaid saying “I shall never have smallpox for I have had cowpox. I shall never have an ugly pockmarked face.” This inspired him later in life to carry out an experiment where he inoculated an eight-year-old with cowpox disease. He recorded the boy felt slightly ill for around 10 days after the procedure, but afterwards was completely fine. After being injected with active smallpox material a few months later, the boy did not show any symptoms of the disease; Jenner concluded his experiment had been a success.

After writing up his findings, Jenner decided to name the new procedure vaccination as the Latin for cowpox is ‘vaccinia’. His paper was met with a mixed reaction from the medical community. Despite this, vaccination began gaining popularity due to the activity of other doctors such as Henry Cline, a surgeon whom Jenner had talked closely with.

Due to the success of the procedure, especially compared to variolation, by the turn of the century (just a few short years after Jenner had run his experiment) vaccination could be found in almost all of Europe and was particularly concentrated in England. The success of Jenner’s work is outstanding. By 1840 vaccination had replaced variolation as the main weapon to fight against smallpox so much so that variolation was prohibited by law in British Parliament. The disease that had ripped so mercilessly through the world for centuries was finally declared eradicated in 1977 by the World Health Organisation (WHO) – perhaps more than the deceased Jenner could have ever hoped his discovery would achieve.

Despite undeniably being a force for good in terms of the world, Jenner was also a remarkable person on a slightly smaller scale. Despite low supplies at times, Jenner would send his inoculation to anyone who asked for it – medical associates, friends and family, even strangers. Later in his life, he even set up his ‘Temple of Vaccinia’ in his garden where he vaccinated the poor free of charge. Despite the opportunity, Jenner made no attempt to profit off of his work, rather viewing his invention as a contribution to science and to humanity, and this was perhaps vital for the speed at which the vaccine and vaccination process spread.

Nowadays vaccinations have changed – not in principle but in the nitty-gritty science of them – as we have begun to know more about how our immune system works. Jenner’s inoculant was adapted and changed to suit different diseases, containing either very mild strains of a virus with similar spike proteins, a dead strain of the virus, or even the isolated spike protein, enabling the body to recognise the pathogen without being exposed to the danger of it.

Introducing the body to the same spike proteins found on the harmful pathogen is in essence how vaccination works. The body responds to these spike proteins are foreign and so send phagocytes (a type of white blood cell) to destroy them, and lymphocytes to create antibodies to activate an immune response. This is why a few days after vaccination there may be a feeling of discomfort or slight fever – this is because the body is fighting against those spike proteins.

While the spike proteins are being destroyed, the body creates memory cells. These are the most important part of the vaccination procedure and mean that if the body is exposed to the actual, more dangerous pathogen in the future, the memory cells will recognise the spike protein and the body will have a secondary immune response, so that antibodies are produced in much greater quantity, sooner and more rapidly. Secondary immune responses to diseases are far more effective and often the person will never show any symptoms they have that disease, with the pathogens being destroyed within a matter of days.

These are an example of exciting advances in vaccination. The way these type of vaccines work, such as the COVID-19 vaccine developed in the UK by Oxford University, is that the DNA from the actual virus is injected into an adenovirus (a deactivated virus that acts as a carrier for the actual virus DNA to our bodies), causing the antigens for actual virus to develop on the adenovirus. These can then trigger a strong immune response from the body without the actual virus itself being introduced into the body. This is an effective way to ensure memory cells to that virus are created, and this attributes to the Oxford vaccines high efficacy reports.

The exciting new vaccination adaption is the mRNA material in the vaccine, and this has been used in some of the COVID-19 vaccines. The mRNA essentially is a set of instructions for the body to make the spike protein of the pathogen meaning the body makes the protein rather than it being cultivated in a laboratory and then put into a vaccination, but after that has exactly the same response. This allows the vaccination to be produced quicker and to be more effective. However, due to the newer and more complicated nature of the vaccine, it is more expensive to produce and needs to be stored at very low temperatures due to the mRNAs unstable nature. This can cause logistical issues with storage and distribution and is why the DNA based vaccine has been hailed as the best option for low income developing countries who do not have the facilities to store the mRNA vaccines. DNA vaccines can be stored at fridge temperature as DNA is far more stable than mRNA due to its double helix structure. This novel type of vaccine was developed by two Turkish immigrants living in Germany, who thought outside the box, like Jenner to improve human health in the race against time to find an effective vaccine. They have been enormously successful with the mRNA vaccine displaying 95% effectiveness against COVID-19 seven or more days after the second shot is administered.

During this pandemic, there has been wide-spread appreciation of how vital vaccines will be to control the spread of COVID-19. However, the voices of skeptics, often amplified by social media, seem to have found a more prominent platform to spread their opinions. They do not trust vaccination due to a variety of unfounded concerns. One of these is the argument that that the vaccinations are really ways for the government to implant chips into its citizens. Not only does this theory ignore the historic science of vaccination but logistically the needle would need to be far wider and the subsequent puncture wound would be far more noticeable.

Unfortunately, even though an article by Andrew Wakefield in 1998 was quickly shown to be based upon unfounded evidence, it continues to resurface among skeptics in their argument against vaccines, falsely claiming there is a link between autism and the MMR vaccine. Wakefield not only used only 12 children to test his hypothesis, far too small a group to draw up any kind of reliable conclusion, but he was also struck of the UK medical register for this paper. Wakefield’s study was disproven and redacted, and his hypothesis has been disregarded in the medical community through subsequent research and publication. The amplification of this fraudulent study has been cited as a reason for a decline in the uptake of the MMR vaccination and the subsequent small outbreaks of measles.

For some, when they look at the speed with which the Covid-19 vaccine has been developed – under a year compared to more standard research time which can be as much as a decade – they are skeptical.

However, this is not because of cutting corners in the process; rather it is due to the immense amount of funding and equipment being given to scientists, as well as the sheer number of people working on the vaccine, to prioritise its development. In Phase I, II and III human trials are used and are assessed extensively for how the vaccine works in a diverse range of age groups, races, body types and pre-existing health conditions, as well as to accurately measure the exact immune response of the body – the antibodies and cells that have been produced and the efficacy and safety of the drug. This is then tested again by the approval companies – The Medicines and Healthcare Products Regulatory Agency for the UK, the European Medicines Agency for the EU and the Centre for Disease Control for the USA.

The World Health Organisation listed ‘vaccine hesitancy’ as one of the top ten threats to global health in 2019. This will play a crucial role in how quickly life can return to normal following the COVID-19 pandemic. Vaccinations are humans’ biggest weapon against the pandemic; they are, in the words of Sir David Attenborough, ‘a great triumph of medicine’, and although there has been recent news about mutations of the virus, it is important to remember that this is completely to be expected. The recent talk of the South Africa, UK and Brazil mutations have been due to small changes in the spike protein of the virus which have affected the transmissibility of the virus. There are tests currently being run, but early signs show that the vaccines are still effective against the mutation.

Even in the worst-case scenario, the vaccines can be adapted in a matter of weeks or months, and the government is preparing for a situation in which a COVID-19 vaccine has to be given annually to those at high risk, similar to the current flu vaccine. It comes as a relief that finally, in the wake of such a disruptive and terrible pandemic, there is light at the end of the tunnel and a reason to look forward to better days ahead, knowing that this lockdown will be very much so beneficial as every day more people are getting these game changing vaccinations.